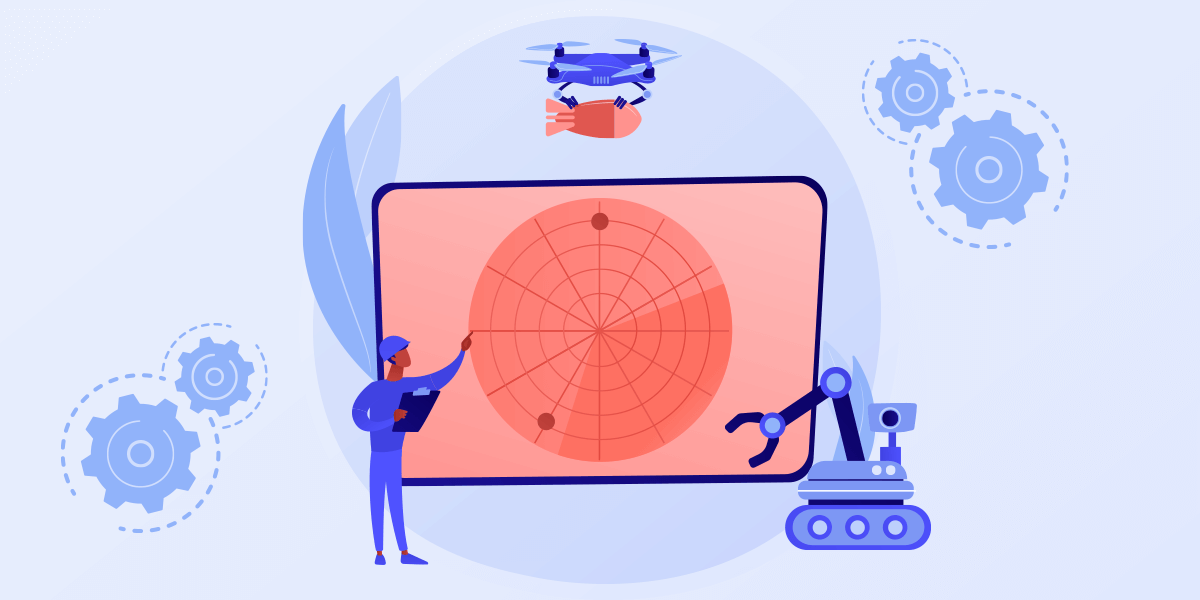 One of the most crucial sectors for the safety of any nation is the Military. The military has constantly engaged in upgrading its prowess by improving its technology for the artillery and also the technology to draw out tactical war strategies. Artificial intelligence in military operations should strive to achieve for modernisation and international collaboration.

This is a meticulous sector that needs to be careful on all fronts. A small miscalculation can compromise the security of a whole nation and may potentially even trigger unwanted wars. Thus, AI in defense is crucial.

There are several avenues where the army can utilize AI applications that can exponentially increase its prowess in combat operations.

Let’s have a brief overview of the above AI applications in defence.

This is a popular mode of training used for special forces where they implement computer science to build computerized models that help soldiers familiarize various combat systems utilized during military operations.

The US Army and Navy have been conducting various warfare analyses which led to the introduction of simulation-based programs.

This portion heavily relies on intelligence, Surveillance, and Reconnaissance. ISR operations help acquire information to support a variety of military activities. UAVs(Unmanned Aerial Vehicles) are highly capable of patrolling border areas as they are integrated with AI. They can identify potential threats and transmit the information to the response team. This feature can strengthen the military and be prepared for the impending danger.

Things get complicated in combat scenarios and recognizing the target is paramount. AI helps the forces to acquire detailed knowledge and understanding of potential areas of operations by analysis of reports, news, and other forms of cluttered information. Additionally, AI also helps to locate the position of the target.

A weapon’s usage is not merely judged by the amount of damage it can dish out, but also its ability to land the target accurately. In modern warfare, autonomous weapons are now relying on computer vision to measure the accuracy and the distance of the target.

AI allows the weapons to be ever vigilant and prevent potential surprise attacks from the sky and even shoot down enemy rockets before they detonate in a populated area.

In warfare, casualties are something that has to be expected and to an extent unavoidable too. Thus, utilizing AI in building autonomous vehicles has the probability to reduce the casualties by 50% as stated by the Defense Undersecretary for Research and Engineering.

One of the shining examples of autonomous vehicles are the stealth bombers. This unmanned aircraft is specifically designed to initiate bombing and trespass the enemy territory without being detected on the radar. Also, they are known for their accuracy with an 80 percent success rate.

One of the core capabilities of AI is to detect trends and patterns with the data presented and to predict the probability of the trend occurring. This is popularly known as predictive analytics. This is being used to monitor homeland security.

Predictive analytics are helpful to correlate signs of preparation for unlawful activities or any activity that can potentially compromise national security. These analytics can also give a prediction of possible suspects of a crime based on past criminal records and other factors.

The military is one of the key sectors which is responsible for the safety of the nation and its population. Many elements in this world want to disrupt the peace and functioning of various nations. To subdue this, ensuring that the military is equipped with the latest technology is highly essential.