Upholding justice is the most crucial responsibility of judiciaries across the globe. Without delivering justice society will collapse and thus, correct judgement must be delivered on time. Pressing charges, filing a suit, attending court hearings, and finally arriving at the judgement has been old school or rather a standard method up until now. As seen in the movies or series, this is very tedious and time-consuming. Sometimes, the judgment gets delivered incorrectly. In wake of these shortcomings, artificial intelligence in justice systems promises positive changes in the procedures to take judicial decisions.

Artificial intelligence has surely made various processes easier and we can easily overcome the complications and challenges prevailing in the current judicial system with the help of AI.

Why AI is needed in Judicial System?

While it may take a while to implement this, here are a few reasons why AI should be incorporated in the judicial system: 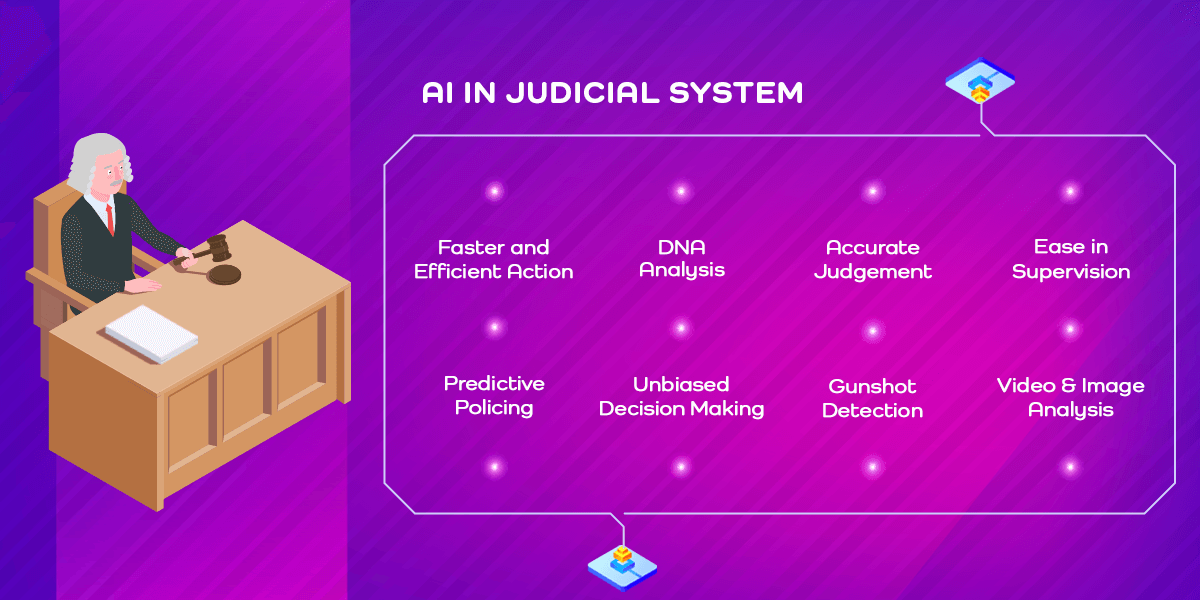 Lawyers and lawmakers in the criminal justice system face numerous challenges like weighing the probability that a criminal defendant might show up for the trial if they are guilty of the crimes committed, what sort of sentence or punishment should be levied. These decisions demand immense knowledge, analytical prowess, and unbiased perception.

Incorporating AI will help in reducing the bias and finalizing the correct judgement to the parties concerned.

For example, when a defendant claims he is not guilty of the crime, the judicial system, with the help of AI, can utilize evidence and recreate the incident to bring in a conclusion without further delay.

Predictive policing refers to the usage of AI algorithms to analyse a large number of data to predict potential crimes. It has been proven that predictive policing is twice more effective than traditional practice. It helps in reducing crimes and saving lives.

LAPD (Los Angeles Police Department) implemented this method for 6 months and found that the crime rate dropped to 19 per cent.

When a trial is conducted traditionally, it is exposed to various forms of manipulations and biased judgements. In order to prevent this, the implementation of AI is necessary. AI will help in bringing out the correct judgement and delivering justice.

To prove any defendant guilty or not, usage of surveillance videos and images are some of the common modes of evidence presented. AI helps in processing large amounts of data with accuracy.

For example, in a situation like a hit and run, the CCTV camera identifies the license plate then the police department uses algorithms to locate and identify the owner responsible for the accident caused. Face recognition technology is also being employed to find suspects with fewer efforts.

AI provides aid to forensic scientists to uncover and process DNA evidence. AI can analyze huge amounts of complex data and recognize patterns that humans can not perceive.

AI helps law enforcement in investigations. Researchers are using artificial intelligence algorithms to detect gunshots at the crime scene, determine the number of firearms used, and find out class and calibre of ammunition.

Justice delayed is justice denied, thus with the above-mentioned scenarios show how effective AI can be. Thus, delivering judgement accurately and without bias is possible. In many scenarios, many cases are still pending due to lack of adequate resources and the ability to present evidence, but AI can solve problems in a record time.

Recently, there have been discussions that AI would be soon introduced in the Supreme Court which was proposed by Justice SA Bobde. As there are many pending cases which need to be resolved immediately, initiating full-fledged AI into the Indian Judicial System is the need of the hour. Artificial intelligence will expedite the judicial system and impart more sensitivity to unearth minute details to bring justice to common people.