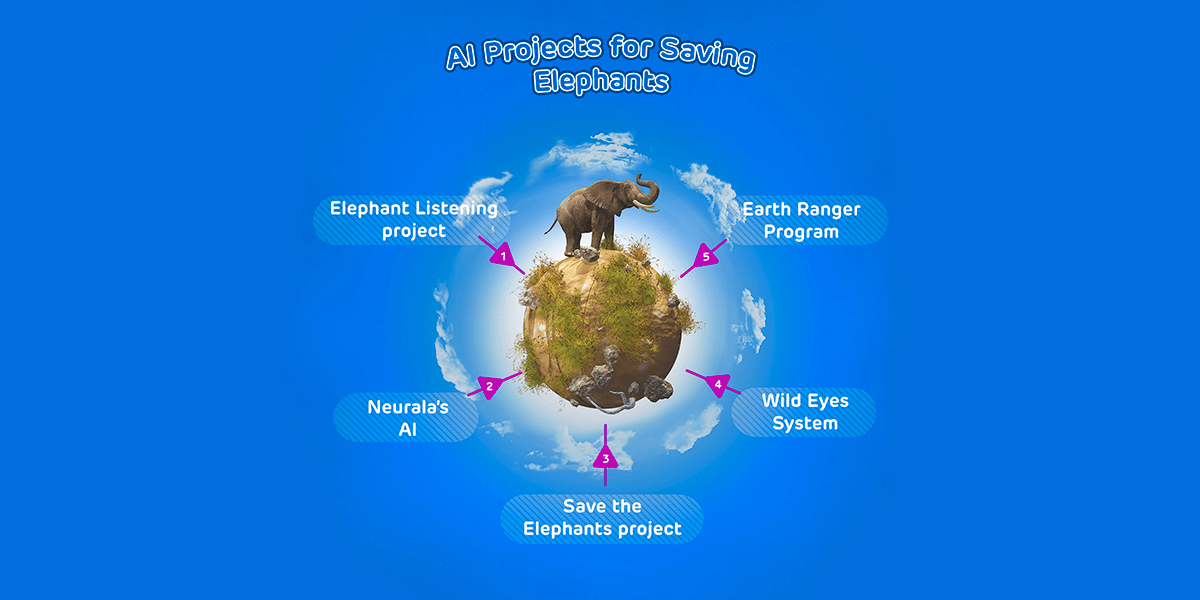 Elephants are the biggest land mammals on our planet. If we look at the statistics, the elephant population has declined considerably during the 20th century. The reasons for this endangered status of elephants are human-elephant conflict, poaching, and habitat destruction. Elephants are important species that provide habitat support for other species and maintain the necessary ecosystems. Poachers are a major threat to elephants who kill these majestic creatures for their ivory.

1- Save the Elephants project

Save the elephants (STE) is an organization working on elephant conservation projects across Africa. They use satellite and GSM collars to track and monitor elephant movements. Collected elephant movement data is monitored with the help of AI algorithms. These software algorithms issue alert messages and facilitate rapid response if some elephants become unnaturally immobile. STE tracking app uses AI algorithms to visualize and track elephants and investigate their behavior.

Due to large scale deforestation activities, human-elephant conflicts have increased. Elephants raid local fields in search of food, damaging farmers’ crops and causing them huge losses. Many humans as well as elephants die in these types of conflict situations every year. WildEyes is a system designed by the environmental organization RESOLVE and software developer CVEDIA to provide an early warning of unusual activities. WildEyes is a camera system based on AI algorithms. The AI camera can be planted on trees, whenever some movement occurs in the surrounding, its motion sensor is triggered. It detects elephants or other animals using computer vision and forwards the images to the cell phones of villagers in real-time to alert them.

This AI elephant detector can be used to support the management of elephant populations in forests in Asia and Africa.

Neurala is an AI company that is leveraging machine learning with drones and cameras to stop poaching problems in Africa. Neurala’s AI-powered software can process terabytes of video data in realtime captures by drones. The software uses deep learning neural networks, a subset of artificial intelligence, to track and predict movement patterns of elephants and other animals. It can also identify unknown vehicles and poachers day and night. Neurala software assists human analysts with its data-crunching potential powered by AI algorithms.

Cornell University researcher Peter Wrege used AI’s potential to process huge amounts of information about elephants in study elephants as well as poacher’s behaviour. Wrege and his team used sound to track and monitor elephant and poacher activities. They used custom audio recorders to collect jungle sounds and then converted these recordings into spectrograms using software programs. Spectrograms are a visual representation of sound waves. Wrege worked with a Santa Cruz based company called Conservation Metrics to build neural networks to sort the noises of jungle sounds and look for elephant sounds and gunshots.

EarthRanger is an AI-enabled analytics program created by Vulcan Inc that helped park managers at Liwonde National Park in Malawi in elephant conservation and poaching prevention. This program assimilates all park managers’ information and creates a real-time visualization to allow them to see all park assets on one screen, such as animals, rangers, helicopters, and sensor and camera data. This program empowered park managers with analytics tools to manage and guide various patrols effectively. The program alerts concerned authority about suspicious activities to allow them to respond to all sorts of security problems. EarthRanger’s analytics have assisted managers to find patterns in poaching behaviour that have been missed.

AI has helped researchers and conservationists uncover several unexpected things. Organizations are employing artificial intelligence-based tools to unravel some other long-held elephant mysteries in order to save them. Researchers are also studying to find social systems and communication manners of elephants with the assistance of AI algorithms and neural networks. Artificial intelligence can ensure a better future for these marvelous creatures of the earth.